The offensive positions are not as impressive this year as the defensive positions, however, this is turning out to be a solid RB class. With that Said, let’s introduce our top 10 running backs in this draft!

Note: These are solely based on talent, athletic ability, size, and production. We are only stating the talent value of these players based on that. Any off the field controversies are noted. 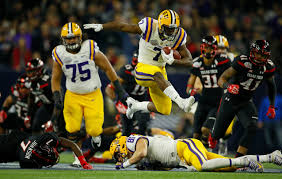 Leonard Fournette caught everybody’s eye with his monster 2015 campaign. He showed the size, power, agility, patience, and long speed that the NFL looks for in a complete RB. Fournette came into the 2016 as the clear-cut top RB, however, his season was cut short to only 7 games due to injuries. Some questions his injuries, as if he milked the injury to preserve himself for the NFL. He does have a large bulk of carries in just 3 seasons (616). However, he did make the most out of every carry, which is evident in his career average of 6.217. He had some of his best games against other SEC teams. Fournette did show up at his pro day, weighing in at 228, which is 12 pounds lighter than his combine size, and 22 lighter than his believed playing weight. He should regain his explosive ability and peak ability by playing between 225-230. 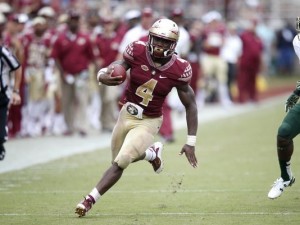 Cook has been an explosive playmaker for FSU since his first year in 2014. He has shown toughness and durability to play with a high volume of touches. Like Fournette, Cook comes with a heavy load of carries, (687) in just three seasons, however, Cook has shown the agility and ability to make people miss in the open field. Cooks is also a productive receiver out of the back field, recording at least 22 receptions every season. Cook runs hard inside, but has been known to be inconsistent as an inside runner. When he sees the opening, he explodes through, and has the quickness to make a defender miss and get more out of the play.  He has had some off the field issues, which could drop his stock, depending on how teams weigh those arrests. 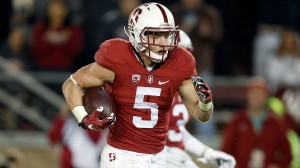 McCaffrey is another RB that got everybody’s attention in 2015, with a TD in every category imaginable. He had 8 rushing TDs, 5 receiving TDs, 1 punt return TD, 1 kick return TD, and 2 passing Tds.  McCaffrey can make plays with the ball in his hands. He is explosive in short area, and has very good ability to make people miss. He controls his stride well and can turn choppy feet into a long run. He has very quick feet, allowing him to change direction quickly. He can create mismatches from the back field or from split out wide. He lacks the size that most NFL teams covet at the RB position. He doesn’t break tackles well, if he can’t make a defender miss, he will be tackled. McCaffery will be a playmaker in the right system as a guy that will get 12-18 touches every game, but not all from a handoff. 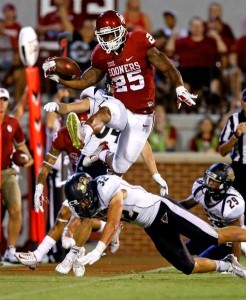 Mixon is a tough one. On the field, there is no doubt that he can be a top running back in this draft, but after the incident at a bar, of striking a woman, he has fallen off many teams boards. He showed plenty of big play potential at Oklahoma, piling up 17 TDs, in 4 different ways. At 6’1 226, Mixon is a big back with explosive ability. Very similar to LeVeon Bell, Mixon is overly patient at times, which causes his running lanes to close quicker than he anticipates. He does tend to wait for a big lane before exploding through them. When he sees the hole, he does explode and can turn a short run into a huge gain. Mixon is a 1st round talent without a doubt, but he will likely fall hard because of his off the field.

Round Value: 1st-7th (could be UDFA because of off the field) 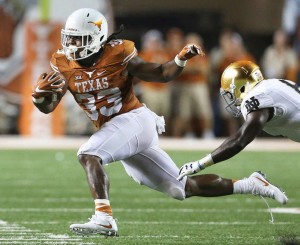 D’Onta Foreman impressed scouts at his pro day clocking a 4.45 40 twice, while weighing 234. Foreman is a power runner, that has the ability to turn a short run into a big run. He is avery stout runner with excellent athleticism, for RB that size. Even with his size and strength, he tried to make defenders miss, which usually causes him to be tackled. At times, he can be indecisive at the LOS. When he is decisive, he powers through the hole, and once he is at the second level, he can turn on the long speed. He needs to work on his pass protection if he is going to play more in the NFL. 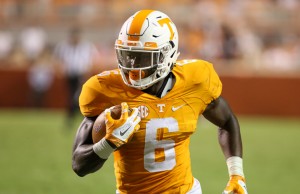 Kamara got his chance to shine when Jalen Hurd left Tennessee. Kamara a hard runner that fights for extra yards, and doesn’t like to go down easy. He has a quick twitch about him and can be a very decisive runner. He doesn’t have great long speed, however, he makes up for that with good elusiveness. He combines speed and power well, but often times will run himself right into a defender. He doesn’t always allow his blocks to set up in the 2nd and 3rd level. 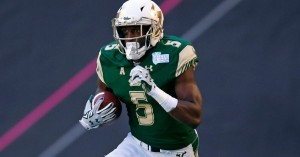 Mack has fluent movement in his hips and the ability to make people miss. Hard to tackle when moving laterally, and can stretch outside runs with his movement. He has good burst helps him turn a short run into a big gain. Does not run with consistent power, as one would hope with his size, however, he does do a good job of making defenders miss and hitting his second gear. Likes to bounce outside runs too far and tends to miss the down hill lane. He doesn’t keep looking for the running lanes in traffic. He does find ways to slip tackles and continue running without power. 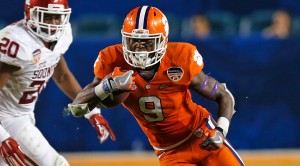 Gallman is a smooth runner with better lateral quickness than long speed, but he has enough burst at the LOS to get to the second level. A bit of an upright runner, but a patient runner that can lower his pad level in traffic. Doesn’t stop moving his feet and fights for the extra yards. He is more of a side to side runner, but does not make sudden cuts, which causes him to be tackled for a loss at times. Runs too up right at the LOS, which will allow LBs to get under him and stop him for no gain. Gallman has good feet and is a tough RB, that will fight for the extra yards, which will keep him somewhat high on the draft board. Look for a zone running offense to look at a guy like Gallman 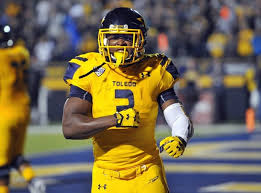 Kareem Hunt is a compact back with a strong build, and powerful legs. He has the ability to make the initial defender miss in the backfield, allowing him to turn negative plays into positive plays. Straight forward runner, that only uses cuts when the hole isn’t there. He has good vision and ability to find the cut back lane. Runs with low center of gravity and forward lean. Struggles to accelerate after making cuts and can be caught in the open field. His initial burst is not the fastest, but with good vision he can find the open lane. Kareem Hunt had a good 2014 season, but battled injuries in 2015. In 2016, he got back to where he was and had another productive season. He is a big back with good vision and should find a spot on an NFL roster. Should fit well into a zone run system. 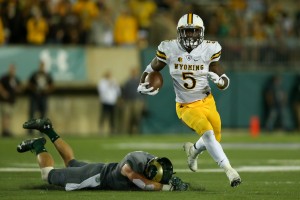 Brian Hill is a well balanced runner with good power and balance. He had a tremendous season in 2016 rushing for 1860 yards and 22 TDs, which added on to his 2015 season, where he at 1631 yards and only 6 TDs. Hill does not like to go down at first contact and will keep his feet driving. He has good balance to run through tackles and keep moving. He has a powerful stiff arm that keeps defenders at bay. Pass blocking is good when taking on blitzing LBs, but struggles to protect the edge. He hasn’t shown to be a dangerous receiver, but he does make himself available to the QB when the Qb gets in trouble. He is a punishing runner, that will try to run through the defender. Doesn’t have extreme break away speed, but he does have good enough speed to make big plays. The more I watch, the more he climbs the board.

There you have it! 10 Running backs, all could go in the first 4 rounds. Joe Mixon could have been a 1st round pick, however, his off the field has drawn some concerns. This is a good year for any team needing RB help. There is so much value to be had on day 1, 2, and 3. 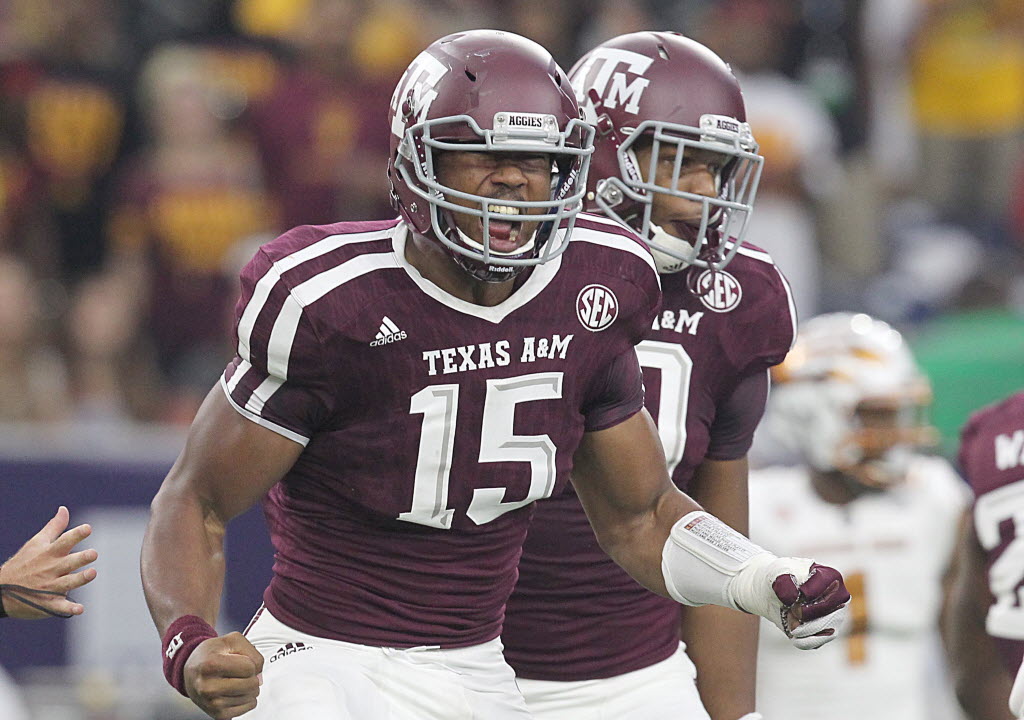 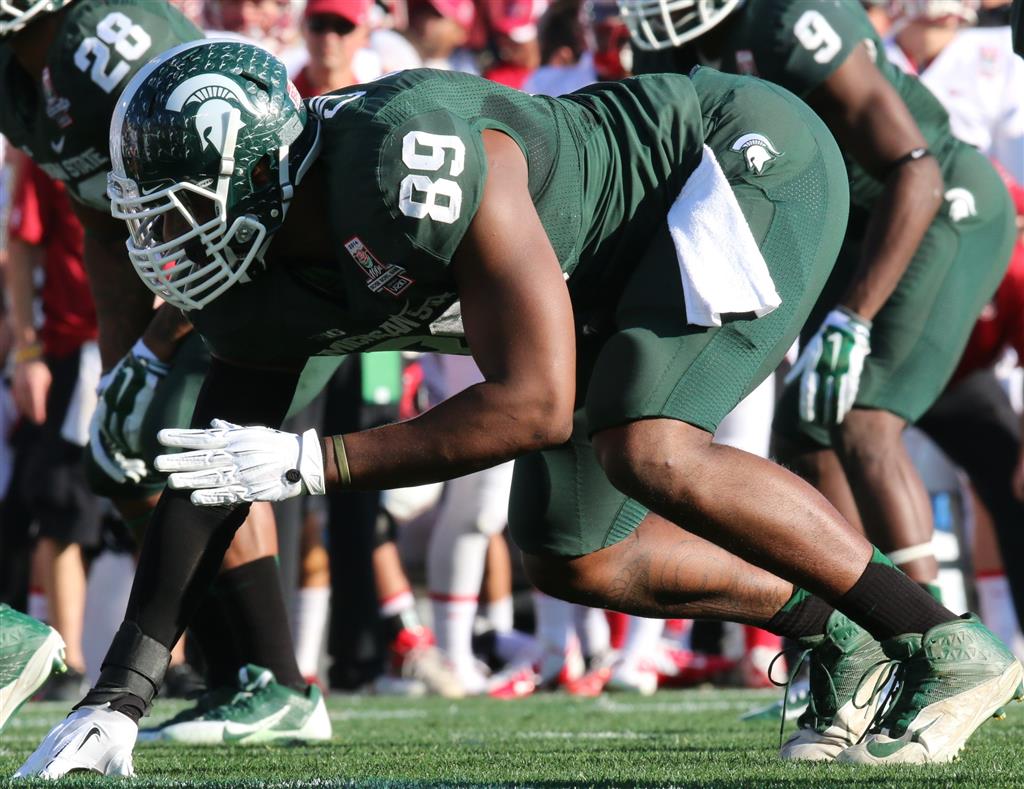