Mariota has been known to stand tall in the pocket, and deliver the pass deep and right into the receiver’s hands. If you look at the play below, you will see it’s a 3 WR set. To Mariota’s right, is a single receiver, that is running a deep inside post. Mariota recognizes the off coverage. He knows his receiver can beat the CB, by making his cut before the CB gets out of his back petal. Mariota knows he needs to be on time with the throw. With the pocket getting pushed back, he stands in, and delivers the football. If you look at the bottom picture, you will see on his receiver had a chance to catch the ball. The pass wasn’t caught, but he did a great job of getting the ball where only his receiver could catch it. 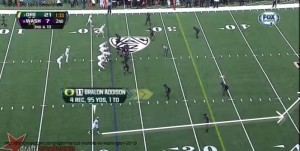 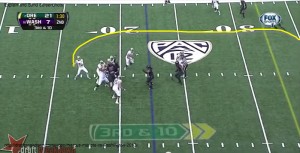 This next play really shows some ability to keep a play alive, with pressure in his face, and still get a 1st down.

As you can see it’s a shotgun formation, with 3 wide, and one RB. The defense is lined up in Nickel, which makes this play from Mariota even better. They have 3 down linemen, 2 lbs, and 5 DBs. Immediately, a defensive lineman gets pressure, and flushes Mariota out of the pocket before he can make his reads. He is able to recognize the pressure, avoids the rusher, yet keep his eyes down field to make a throw. 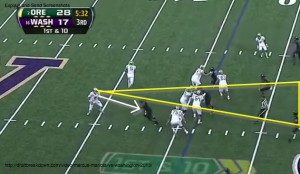 As he is rolling out, he scans the field, and finds a receiver, but there is a defender in the area. Mariota draws that defender to him, by attacking the line of scrimmage. (LOS) Opening up a clean throwing lane to his receiver, who is now wide open  and is able to get the 1st down. If Mariota doesn’t attack the LOS, the defender is free to sit in the zone. If he allows the defender to sit in the zone, he has to throw it away. Throwing it away isn’t a bad play, especially since he avoided a sack, and was forced to roll out. The thing that stands out, is the fact Mariota looked to make a completion, and forced the defender to attack, so that he can complete a pass. 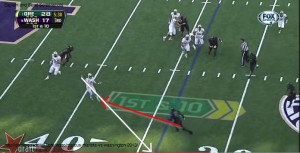 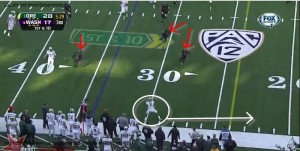 Mariota does a great job at luring defenders to him, and dumping the pass off over their heads, for a big play. Let’s take a look at a very similar play against Tennessee. Marcus Mariota runs a play action that is designed to get out of the pocket. Three receiver route to the left. The outer receiver runs a curl, the slot runs a deep outside post to the end zone, and the TE slips out into a route that progressively gets deeper. The safety has a delay blitz, right at Mariota. Mariota makes the safety miss, which causes the LB covering the TE to freeze. 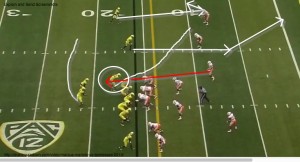 Now, the LB has to make a decision, cover the TE, or play Mariota. The LB heads towards Mariota, allowing him to dump the pass off to the TE, who is now wide open. Mariota hits the TE with an accurate pass, allowing the receiver to turn up field immediately for the TD. Again, Mariota is able to make the initial defender miss, and force a defender in coverage, to come up, allowing his receiver to get open. This turned a 2nd and 2 into a TD. If the LB stayed with the TE, Mariota would have been able to run for the 1st down. More times than not, Mariota is looking to throw the football, even when the play breaks down.

It’s common for QBs in a system like Oregon’s to get recognition and become a fan favorite. Mariota is more than a system QB. He does a great job at keeping his eyes downfield at all times and looking to throw the football. That sounds like a normal thing for any QB, but when the rush comes, some QBs freak out, and either run around frantically, or just take off. Mariota is one of those Qbs who looks to be a Qb first, and only runs when it is designed, or when he has to. Very similar to Russell Wilson. I’m not comparing those two, just in the sense of when they run. He doesn’t have a cannon, but he has the arm to get the ball down field and make just about every throw. He has the poise, to stand tall in the pocket, and deliver the football, with accuracy. When his team needs a big drive, he is able to deliver.

The downfalls I see of him, he tends to leave his feet causing him to miss his target, tends to drop his shoulder when he throws, and he locks onto receivers at times. All 3 of these downfalls are very coachable issues.

Mariota has the ability to be a very good to elite QB at the next level. He is already off to a hot start, and if he can continue, he may be the 1st QB drafted in this draft.