Five Games to Watch: Week One 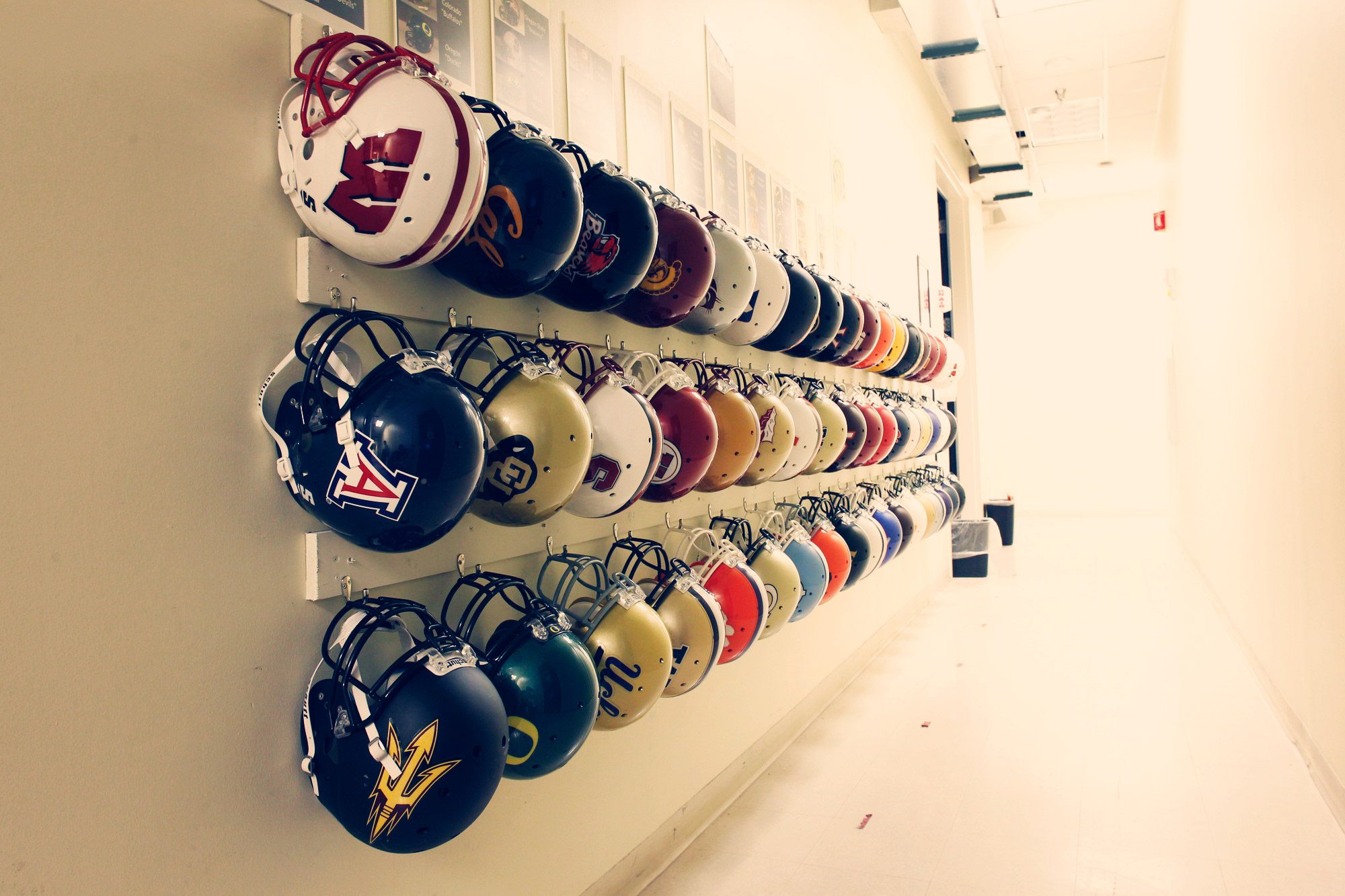 This is the first ranked matchup of the season and it also kicks off the SEC season. This is also the debut of football on the brand new SEC Network. The game features two teams that must replace quarterbacks that led their teams to the pinnacle of college football. Johnny Manziel and Connor Shaw are both now playing for the Cleveland Browns of the NFL. True Freshman Kyle Allen will lead the potent Aggies attack and Senior Dylan Thompson gets the nod for the Gamecocks. Both quarterbacks will be in a tough spot, with a SEC matchup to kick off the season. The outcome of this game will help prove which school will be able to rebound quicker from the highs of last season. Two future NFL prospects to watch in this matchup:

Ogbuehi will take over the key Left Tackle position for a very potent offense. The Aggies have led the SEC in passing, scoring and total offense for two straight years. Ogbuehi has the build to be a LT at the next level and will have the opportunity to prove his skill in a stacked SEC. He is going to have to protect a Freshman QB if he wants his Aggies to enjoy as much success as the last two years.

Mike Davis clearly established himself as one of the top running backs in the nation last year. Playing in the stacked SEC, Davis rushed for 1183 yards and added 352 receiving yards. He scored 11 touchdowns and averaged 5.3 yards a carry. Davis will have to carry his team even more this year with the loss of Connor Shaw at QB. Opening at home against Texas A&M will be a tough test and we will see how Davis kicks off his 2014 campaign.

Part of the Chick-fil-a Kick off Classic, the Broncos of Boise St will travel to Atlanta to face off with the 18th Ranked Ole Miss Rebels. This will be the sixth straight year Boise St will open their season in a national televised games. On the other side of the ball, Ole Miss is hoping to finally put everything together and make some noise in the SEC. Although Boise St may not have any household names, they are always a solid team and with new coach, Bryan Harsin and his fast paced offense this team looks poised to pull the upset. Ole Miss returns Senior QB Bo Wallace, who ranks 2nd to only Eli Manning in career passing yards. This is the first matchup between the schools and is a chance for both teams to showcase their talent on the big stage to kickoff the season.

Ioane is a returning starter in the Broncos secondary and a leader of their defense, who returns 8 starters overall. Last year, Ioane compiled 59 tackles. Ioane will again lead a defense that continues to dominate the Mountain West. Ioane has prototypical size and speed to compete at the next level. A decent start to the season against a ranked opponent could propel him in the rankings.

Bo Wallace returns for his senior season after a solid junior campaign. Wallace threw for 3,346 yards and rushed for another 355 yards. He added 24 touchdowns with just 10 interceptions. Wallace returns with some weapons on offense, Vince Sanders at wide receiver and I’Tavius Mathers in the backfield. With these weapons, Bo Wallace should have another stat stuffing season and a huge game against the Boise St Broncos would open some NFL eyes for next years draft.

Making the West to East trip, the UCLA Bruins look to open up the season against the ACC’s Virginia Cavaliers. UCLA comes from the passing prolific Pac 12 and have quarterback Brett Hundley to lead their attack. Virginia coming off an abysmal 2-10 season look to bounce back, but may have difficult sledding against the 7th ranked Bruins. UCLA looks to kick off their season with a non-conference victory on the road, which they have struggled doing, since 2006 they are just 4-5 in that scenario. Virginia is 9-2 in home openers, but has not faced a ranked opponent in that stretch. The first meeting between these schools will kickoff the season for both teams, who have different agendas.

Hundley had scouts salivating last season and he hopes to keep it that way in an opening matchup against a shaky Virginia defense. Hundley had 3,071 passing yards to go with 748 rushing in 2013. He added 36 total touchdowns with only 9 interceptions. Hundley returns for a potential run at the Heisman Trophy and a spot in College Football’s new playoff system.

Anthony Harris has been a bright spot on a bad Virginia Cavaliers the past few seasons. Last season he compiled 8 interceptions and 80 tackles. He leads a senior laden secondary, which can be said to be one of the best in the nation. Harris is one of the top safeties in the nation and will be one of the first defensive backs to come off the board in next years draft.

Between the Hedges in Athens, Georgia, One of the ACC’s best will face one of the SEC’s best. Clemson has to replace Taj Boyd, at this time Cole Stoudt is the listed started, but some whispers are saying Deshaun Woods could be poised to jump in at a moments notice. On the other side of the gridiron, Georgia has to replace Aaron Murray, who nearly broke every SEC passing record on the books. Georgia plans to start Hutson Mason, who loves the up-tempo offense and has been decent in mop up duty in the past. Both teams look to start the season with a victory against a ranked opponent. We will see who can complete that task, the Tigers or the Bulldogs.

Vic Beasley would have been a top pick last year had he come out, but he choose to return for his senior season. Last year, Beasley tallied 23 tackles for loss, 13 sacks, 4 fumbles forced and 41 total tackles. Beasley hopes to improve on those numbers and lead his team towards an ACC Championship. Beasley currently plays DE for the Tigers, but may be better suited for an OLB position at the next level.

Ramik Wilson is the senior leader of the Bulldog defense. Leading a very young defense last year, Wilson added 133 total tackles, 11 tackles for loss and 4 sacks. Wilson returns with 7 other starters to lead one of the SEC’s toughest defenses. Wilson and Jordan Jenkins are both NFL caliber linebackers and look to lead Georgia in this opening matchup versus Clemson.

In the 2014 Advocare Texas Kickoff, the Wisconsin Badgers will face the LSU Tigers. The Wisconsin Badgers come into the season ranked #14 and looking to get into the mix in the Big Ten. The Badgers used 3 different QBs last year, but will settle on Joel Stave to start the season, even though Tanner McEvoy seems to fit the offense better. On the other side, LSU has to replace Zach Mettenberger, who was selected by the NFL’s Tennessee Titans. Sophomore Brandon Harris gets the call. Both teams are looking for a great start to the season in hopes for a bid in the new four team playoff system. Wisconsin and LSU will both compete for conference titles this year and a non-conference victory will kick that off.

Melvin Gordon is the next great Wisconsin Badger in a long line of great running backs to come from that school. Gordon rushed for 1,609 yards and 12 touchdowns last season. Gordon is not used much in the passing offense with only 1 catch for 10 yards. Gordon looks to take over the majority of the carries with James White leaving campus. Gordon, with another solid season will be one of the best running backs in next year’s NFL draft.

La’el Collins slides over to man the LT position for Les Miles’ Tigers. Collins has started at both the guard and tackle position for the Tigers over the last 2 seasons. He helped lead LSU to school record in touchdowns with 37 and yards per game with 465.9. Collins returned to school to complete his degree in interdisciplinary studies and further prepare himself for an NFL career.