The 2015 East West Shrine game, was more reminiscent of an old fashioned football game. The Qbs didn’t have the same flare that Jimmy Garoppolo showed last year, although, Anthony Boone showed some poise and flashes of an NFL QB. Heading into the game, Tre McBride was considered the best player, but it was the defensive lineman that stole the show.

Best of the DL:

Za’Darius Smith Kentucky: Smith has played in the shadow of Alvin ‘Bud’ Dupree for most of his career at Kentucky. Za’Darius Smith came to make his own name, and step out of the shadow of his teammate Bud Dupree. Smith has good size at 6’3 263 (Unofficial). Smith showed very good get off, the ability to bend, and get off blocks to turn the corner. He did well setting the edge, and looks to have all of the tools to play well at the next level.

Anthony Chickillo Miami: Chickillo really set out to prove that he has a ton of versatility. Staring in a 3-4 defense,e Chickillo doesn’t get the opportunity to be a pass rusher as much as he may like. East West Shine Game rules force teams to only play a 4-3. Chickillo was free to play DE and rush the passer. At 6’4 275 (unofficial), Chickillo showed very good acceleration, strong hands, and the ability to push OL around. Chickillo could fly up draft boards before the draft.

Jermauria Rasco LSU: It comes as no surprise that a defensive player from LSU is well coached and disciplined. Rasco is as advertised. He does a great job of shedding his block, staying home, and keeping everything in front of him. Rasco plays with toughness that most LBs play with. He should be a fit in any system at the next level. I even feel as if he can play LB in any scheme.

Derrick Lott UT-Chatanooga: The DT out of FCS, UT-Chatanooga, showed flashes against more FBS players. Lott showed a lot of power, leverage, and length. On tape, Lott showed he can be a force, beating blocks and getting into passing lanes. Lott showed some ability to dominate at the LOS by beating a block, and nailing RB John Crockett.

Ben Heeney Kansas: If Heeney wasn’t on your radar, he probably is now. Heeney is a tackling machine, and he showed that on both defense and special teams. In punt coverage, Heeney absolutely leveled the punt returner. Heeney showed his ability to cover, and make tackles all over the field. Heeney should be an immediate starter in the NFL, in just about any scheme.

Best of the QBs:

Anthony Boone Duke: With a lackluster Senior QB class, Boone showed the most. Boone showed patience to let routes develop, showed poise in the pocket with defenders in his face, and he showed he has a strong NFL arm. His numbers weren’t great, but he showed the best mechanics out of the group.

Best of the RB:

John Crockett North Dakota State: The biggest questions for Rbs coming into the NFL are, do they have good vision, and can they protect the QB? Most rookies struggle to get on the field because they lack pass protection, or vision. Crockett showed good ability and willingness to protect the Qb with good base, and technique. Crockett also showed good vision to find the open running lane. The game statistics can be misleading, since most RBs get better as the game goes on. For the ability to run the football, you can watch tape. Crockett was at least able to show his willingness to protect the QB, and the vision that is needed to succeed.

Dominique Brown Louisville: The Louisville RB played with power and burst. Brown ran a little high at times, which is why he draws comparison to Brandon Jacobs. When Brown did lower his shoulder, he was able to bull forward for more yards. Brown also showed ability to stay in on pass pro.

Terrence Magee LSU: Magee showed good burst and vision to find running lanes. Like most RBs from LSU, Magee has versatility to do a little bit of everything. Magee didn’t have the numbers that Brown did, but I think he showed the most flash out of any RB.

Best of the OL:

John Miller Louisville: John Miller played with good anchor, footwork, strong hands, and balance in both pass protection and run blocking. Miller cleared running lanes, next to his teammate Juron Brown, the entire time he was in. He even showed adequate pass protection. Brown showed very strong hands while blocking. Once Miller got his hands on his opponent, they struggled to get loose. With his versatility to play LG or RG, OL needy teams could target Miller in Day 2 or early Day 3.

Damian Parms Florida Atlantic: Parms came up with 2 ints against 2 different Qbs. One of those was off of a tipped pass, but Parms showed awareness to find the football and make a play. At 6’2 210 pounds, Parms shows good size, and fluent hips to play FS, and cover man to man.

Justin Coleman Tennessee: Coleman flashed his closing speed while playing off coverage. Coleman has good area quickness, which makes him a great fit in a zone coverage system. At 5’10 188, Coleman has the ability to flip his hips and make a play.

Josh Shaw USC: Shaw got beat by Gardner to the end zone, but shaw was able to regain inside leverage, and intercept a bad pass. Shaw has good ability to lock up man to man, and get physical at the LOS. Shaw is a little stiff, but should fit nicely in a press man scheme.

Best of the WR:

Andre Davis USF: Davis came out of nowhere and made plays every chance he got. He ended the game with 3 recs for 36 yards, but on every reception, he showed burst with the ball in his hands.

The most impressive group, has to be the defensive line. Chickillo showed versatility, Za’Darius Smith stepped out of Dupree’s shadow, Xavier Williams played well anchoring on defense, Travis Raciti showed some flashes, and Jermauria Rasco just showed versatility and discipline play. All of the players I listed above, helped their draft stock headed into the combine. Hopefully they can add onto their resume, with quality combine and pro days.

Next up the Senior Bowl! 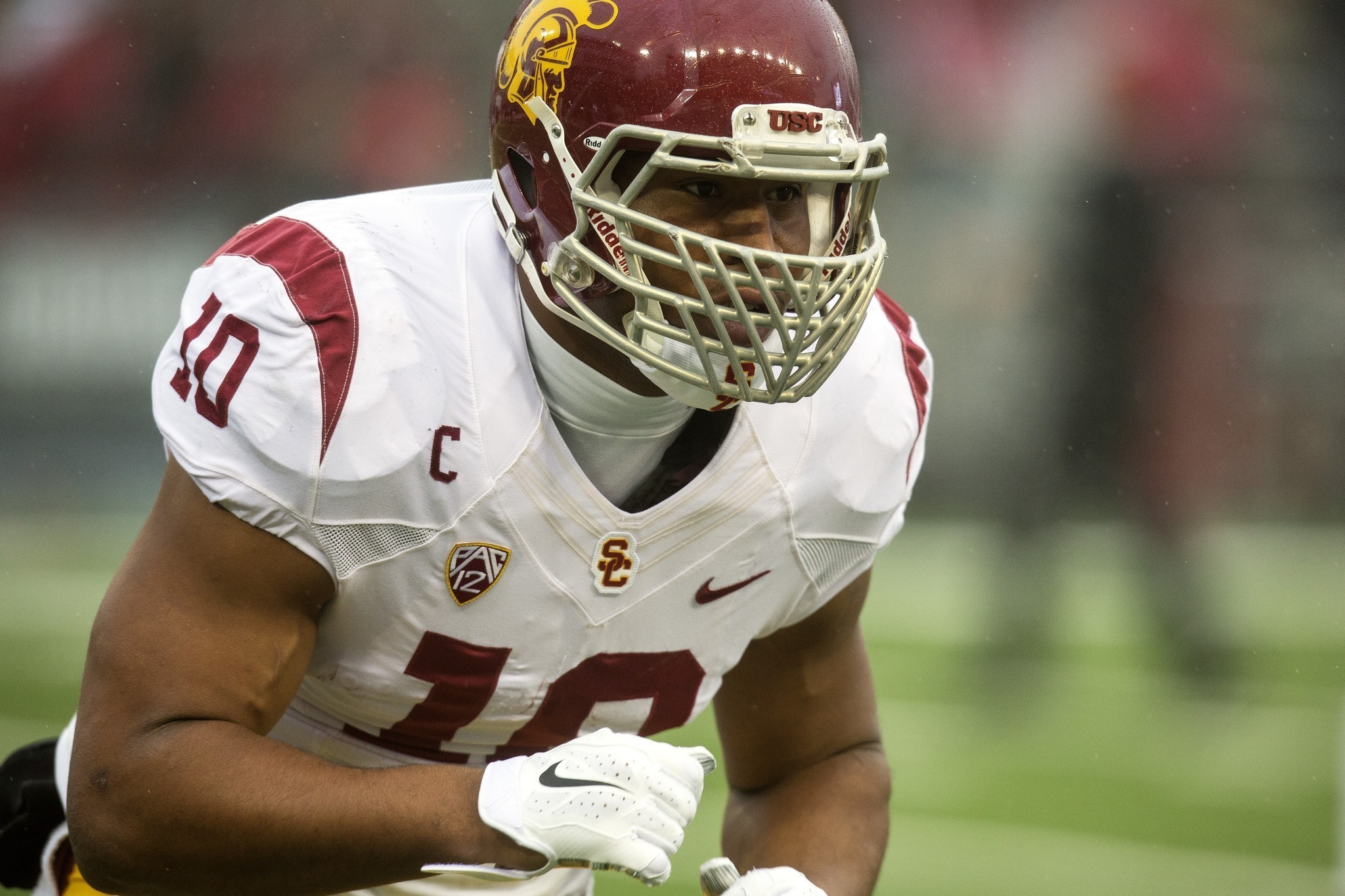