This week, we are going to start a new part of our weekly “Five Games to Watch” segment, Scout Bret LaGasse is going to give his input on our players to watch for each game.

After both having this past weekend off, Auburn and Kansas St. will meet up in Manhattan, Kansas in primetime this Thursday. Auburn is coming off two solid victories at home against Arkansas and San Jose St. While, Kansas St has defeated FCS SF Austin at home and Iowa St on the road to start their season. Auburn is coming off a defeat in the National Championship game against Florida St and sits fifth in the current rankings. Kansas St is looking to continue a great tradition and slide up the rankings of which they currently sit 20th. If the Wildcats could knock off the 5th ranked Tigers it would go along way towards their potential playoff positioning.

Nick Marshall, after not starting the opener due to a suspension has come on to put up decent numbers. He has not really been pressed into having to put up numbers thus far this season. He currently has 151 yards passing, 122 yards rushing and 3 total TDs. This will be Marshall’s first test of the season, going into a hostile environment, in which the Wildcats will be looking for the upset. Marshall has decent attributes that could translate to the NFL. Time will tell and the more games under his belt the better.

Small in stature, but carrying tons of heart and will, Lockett is the heart and soul of the Kansas St football team. Lockett this season has 7 catches for 145 yards and a touchdown. He will have to come up big this week if they hope to upset the 5th ranked team in the nation. Lockett projects as a gadget guy at the next level who could carve a spot out on special teams early and work his way into the lineup on offense.

Coming off an upset victory at home versus the Louisville Cardinals, Virginia will look for another upset in Provo, Utah. Virginia opened up with three straight games at home, in which they played tough in a loss to UCLA, destroyed FCS Richmond and upset the previously ranked Louisville Cardinals. On the road for the first time they will take on Taysom Hill and the Cougars of BYU. BYU is 3 and 0 to start the season with victories over Uconn, Texas and Houston. BYU looks good so far this season, but being an Independent they must dominate every game to have a chance at the four playoff spots.

Harris in the three games this season has a total of 24 tackles, 1 interception and 1 pass defended. Harris is the leader of the Cavalier defense and will have fun this Saturday trying to stop Taysom Hill through the air and on the ground. Harris is the top safety in college and should be the first to hear his name on draft day.

“ The heart and soul of Virginia’s defense. Good coverage safety, who also plays well in the box. He gives this defense that extra edge to play tough. “            – Bret LaGasse

Hill has put up some terrific numbers thus far this season. He currently has 689 passing yards, 356 rushing yards, 10 total touchdowns and only 3 turnovers. Taysom Hill is only a Junior and is already climbing draft charts. If he returns for his senior season and continues to improve he could very well be one of the top quarterbacks available.

“ Just a tough competitor, who is leading BYU to big time wins. Hill is a dynamic playmaker that BYU needs if they want to make the playoffs”            – Bret LaGasse

Mississippi State will open their SEC schedule traveling to LSU to take on the Tigers in Death Valley. The Bulldogs come in 3-0 with wins over Southern Miss, UAB and South Alabama. This week the intensity ramps up against the eighth ranked team in the nation. LSU is a very young team, but has athletes everywhere. LSU has beaten Wisconsin, Sam Houston St and UL Monroe, which over the last two games have not surrendered a point. LSU will have the opportunity to compete this year, but I believe they are set up to really set the world on fire next season, when all these underclassmen have some experience under their belts.

The junior middle linebacker for the Bulldogs, McKinney is a man among boys at 6’ 5” and 245 lbs. McKinney has 20 tackles and 2 sacks on the season, but always seems to show up when they take on SEC competition. McKinney has many NFL scouts salivating and some cannot wait to get their hands on him come draft day.

“ McKinney is another athletic linebacker, who plays all over the place. A true three down linebacker that can cover, play the run and get after the QB.” -Bret LaGasse

Collins protects the blindside for QB Anthony Jennings and run blocks for a stable of running backs. The Tigers offense is currently ranked 37th in rushing and 91st in passing in the NCAA. His competition will ramp us this week, so he will have the opportunity to solidify himself as one of the top offensive tackles in this years draft class.

Last season, Florida State came into Clemson, which was dubbed a great showdown in the ACC. Florida State demolished Clemson on their way the ACC Championship and National Title. Clemson is out for some revenge and will look to knock off a shaky number one team. The Tigers were routed in the opener by Georgia and then the next week destroyed FCS South Carolina St 73-7. I guess we will see which Tigers team shows up. Florida State has looked shaky, beating Oklahoma State by 6 in the opener and surprisingly not blowing out FCS Citadel at home. Tons of questions which we hope will be answered at the end of this one.

Lining up next to a stat machine in Vic Beasley, Jarrett has also made a name for himself. Jarrett put up 3 tackles against Georgia and then sat out the game against South Carolina St. Hopefully he can return to form against the defending champs and provide support against a stacked offense. Jarrett has the stout build and frame to man the nose in an NFL defense.

“ Athletic Defensive Tackle that is a crucial part of Clemson’s pass rush. Headed into the season, Jarrett was overlooked, he shouldn’t be anymore.”            -Bret LaGasse

Josue Matias is a senior leader on the Seminole offensive line. He currently is a guard but has the ability and size to kick outside to play tackle. His offensive line currently propels the 20th best passing offense in the nation.

A great week 4 matchup pits two college programs with tons of history, but not much to show for lately. Bo Pelini and Al Golden have done their best to bring back the prestige, but with not too much to show for it. The Hurricanes have bounced back after an opening night loss to Louisville with wins against FCS Florida A&M and Arkansas St. Nebraska has not looked great, but sit at 3-0 with victories against Florida Atlantic, FCS McNeese St and Fresno St. This matchup should show which program is on its way back or which one will continue to flounder.

Perryman has been given the opportunity to wear number 52 at the “U”, which means he means business when it comes to playing defense. This season he has compiled 25 tackles, 1 sack and 1 pass defended. His best game against Louisville, further proves when the lights are brightest he shows up the biggest. Perryman will have a fun time chasing around one of the best runners in the nation in Ameer Abdullah.

“ He plays the game the way it should be played. Old school style football player, that doesn’t care who you are, he will hit you like a ton of bricks.”            -Bret LaGasse

One of the best backs in the nation, coming off another 100 yard performance against Fresno St, looks to continue his march to a seat in New York for the Heisman presentation. Abdullah has 396 rushing yards, 105 receiving yards and 4 total touchdowns. Ameer turned in a play of the year candidate against McNeese St two weeks ago as he caught a pass and took it to the house to save his team from the upset. Abdullah is small in stature but seems to be able to carry the load and could turn into a decent running back prospect in the league.

“ Just a very versatile running back. Lines up in the slot, catches the ball out of the backfield, runs inside and out, and is also good in pass protection.”            -Bret LaGasse 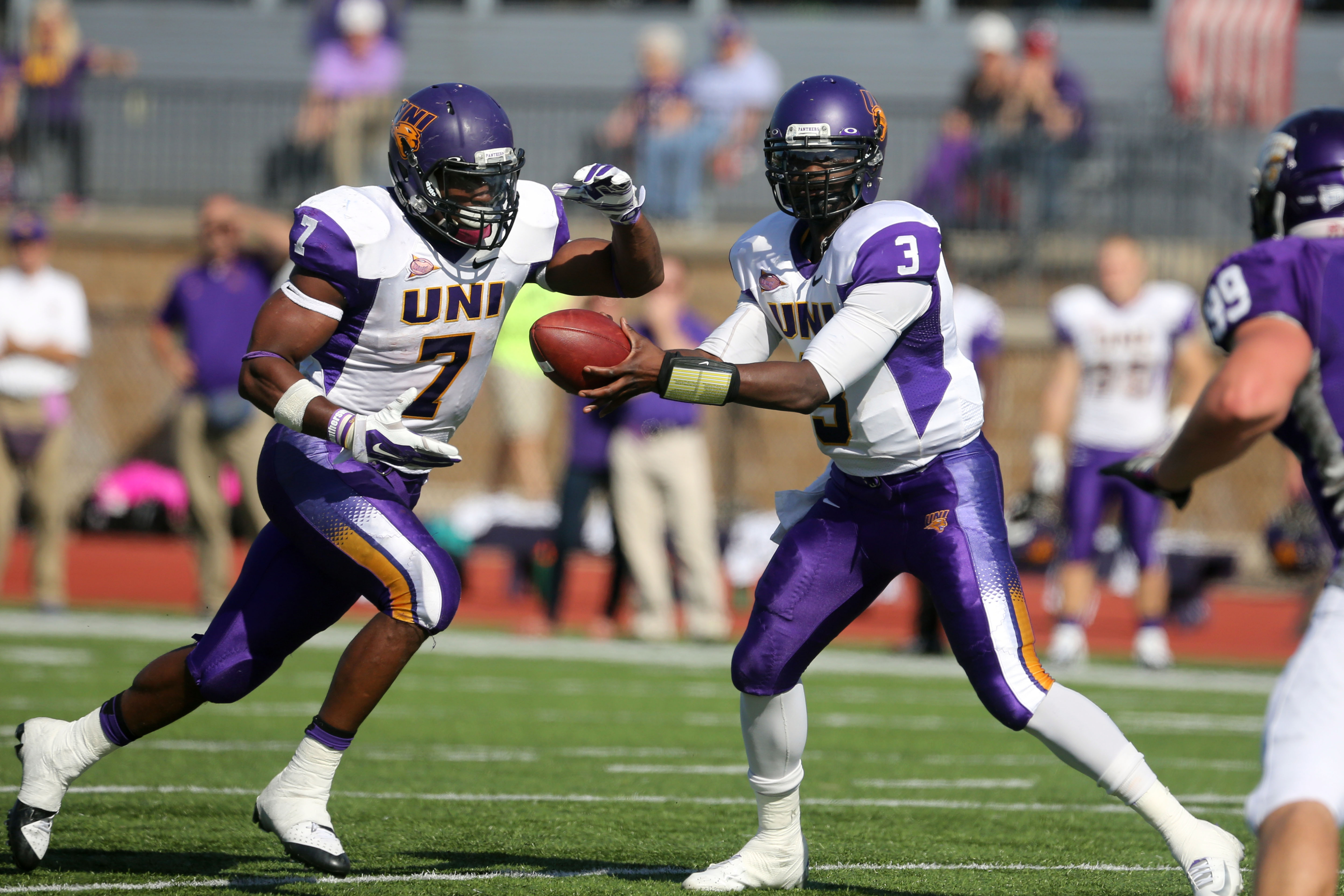