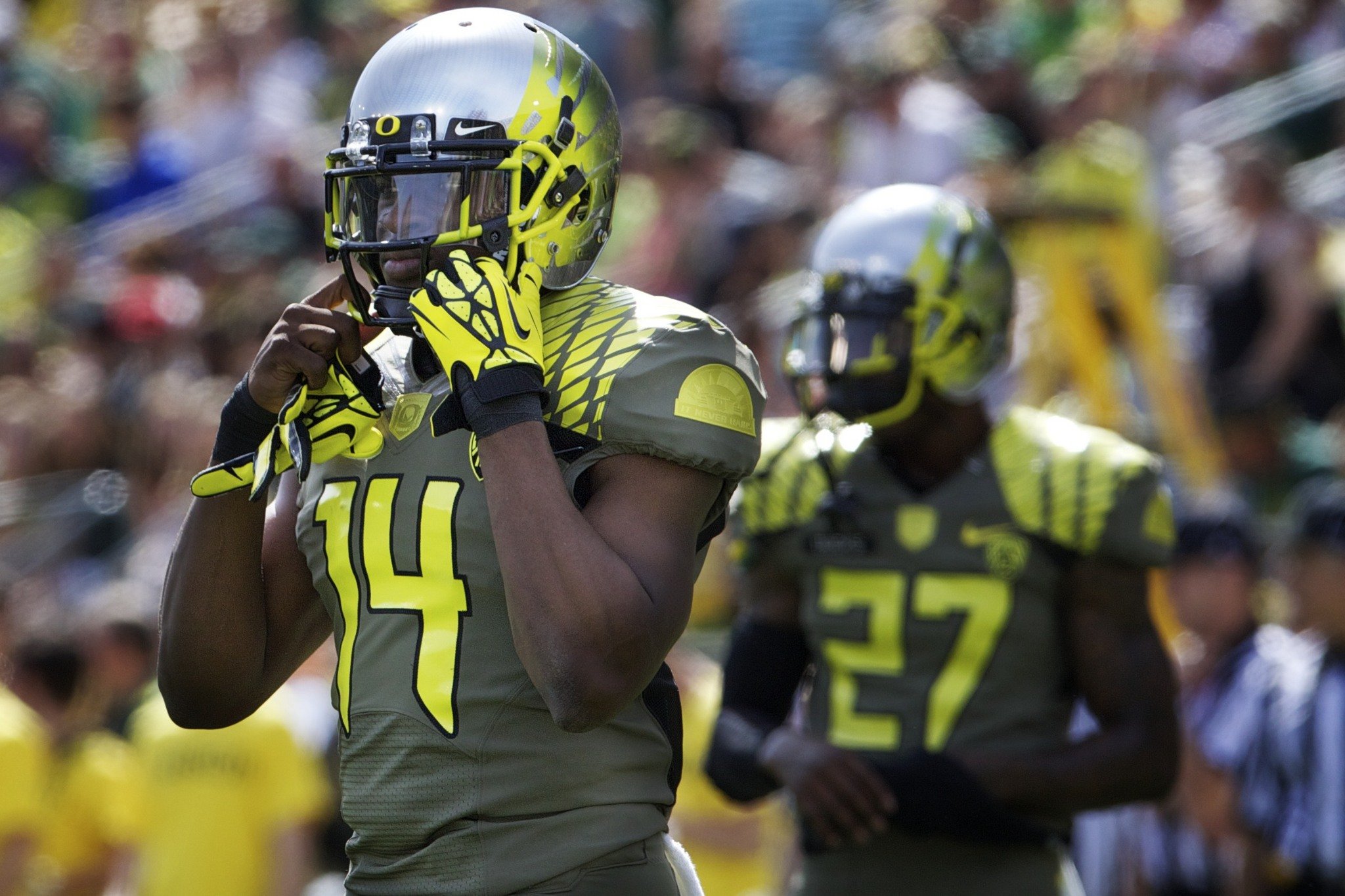 Georgia is playing their 6th game of the season and it is their 4th in the SEC. That is a tough stretch, but the Bulldogs are tough, they smoked the Vanderbilt Commodores last week 44-17. The week before they struggled against Tennessee squeaking out a 35-32 victory. Missouri on the other hand has only played one conference game. Last week they defeated South Carolina on the road 21-10, after an embarrassing loss at home to Indiana. Missouri has the opportunity to assert themselves within the conference while Georgia hopes to continue to impress the voters.

Wilson is the newest LB to come along in what seems like a pipeline to the NFL that has developed in Athens. Wilson this season has tallied 37 tackles, 1 sack, and 4 tackles for loss in 5 starts this season. Wilson is a 6’ 2”, 237-pound linebacker with sideline to sideline range. He also has no issues in coverage and has all the intangibles that NFL scouts are looking at.

Scout’s Take:
“Georgia has become LB U, and Ramik Wilson is the next one. Wilson
possess good size, strength, and athleticism. Wilson is a true 3 down LB that has the ability to drop in coverage, blitz, and play the run. Wilson is also the signal caller for the Georgia Bulldog defense.” – Bret LaGasse

Webb is a redshirt senior, strong safety for the Tigers. He is the veteran leader of the defense and the voice of it as well. Webb has tallied 27 tackles, 2 passes defended and 1 interception. Webb is a decent size safety but also has the ability to drop down and man the corner position at the next level. Webb could contribute right away on special teams and work into a rotation in the secondary in the NFL.

A huge battle in the Big 12 and the winner will come out the leader of the conference. In Waco, Texas the Horned Frogs will meet up against the Bears in which should be an old fashioned shootout. TCU upset the Oklahoma Sooners at home last week in their toughest game thus far this season. Baylor defeated Texas easily as they have done every game this season. This game should be fun to watch and it may come down to who has the ball last.

Hunter is a mountain of a man at 6’1” 305 pounds and anchors the Horned Frogs’ defense. This season he has compiled 14 tackles, 2 tackles for a loss and 1 forced fumbles. However the numbers don’t show how many double teams he has absorbed and allowed the linebackers to freely move and make plays. NFL teams need men like Chucky Hunter for their defenses to be successful, he will have a long career in the NFL.

Scout’s Take:
“Very balanced DT. He plays the run well, while showing ability to get to
the QB. Just an all around solid defensive prospect for TCU!” – Bret LaGasse

Petty is battling a back injury quite admirably and is still leading his team to victories by wide margins. Petty has pretty good numbers this season with 1110 total yards for 12 touchdowns and only one interception. His passer rating is an impressive 151.80 and he is leading the number one scoring offense in the nation with 51 points per game. Petty is a big quarterback at 6’3” 230 and runs his offense effectively, however in other offenses he may struggle.

Both teams are coming off conference losses, Oregon lost at home to the Arizona Wildcats and UCLA lost at home to the Utah Utes. Both team will be looking to rebound and not lose that pivotal second game. A second loss will all but eliminate any team from the 4-team playoff that will decide the nation champion this year. UCLA will look to protect QB Brett Hundley, who was sacked an amazing 10 times last week. Oregon will look to get their offense back on track as well as their 55th ranked defense. This game will go far to determine who may represent they Pac 12 in the new playoff system.

Almost like a Richard Sherman or Darrell Revis of the NFL, opposing quarterbacks shy away from attacking Ekpre-Olomu. He has tallied 26 tackles, 1 tackle for loss, 1 interception and 3 passes defended. He also serves as the Ducks main punt returner. Ekpre-Olomu is a stud at corner even though he is not the biggest corner you have ever seen at 5’10” and 195 pounds.

Although he is losing carries to Sophomore Paul Perkins, Jordan James still has an impressing skill set for NFL scouts to admire. James has 153 total yards on the season but is a very good running back in pass protection in a pass heavy offense. James is 5’9” and 193 pounds and will get a look at the next level if he finishes the season well and tests well at the combine.

Scout’s Take:
“ Don’t let his size fool you. He has know problem lowering his shoulders
and fighting for extra yards. Short RB that has a good build to him.“ – Bret LaGasse

Coming off a crazy week of football with big victories for both of these teams, they both look to assert themselves as the dominant team in the SEC. The Auburn Tigers defeated the #15 LSU Tigers 41-7 in absolute dominant fashion. The Mississippi State Bulldogs defeated #6 Texas A&M at home 48-31 in a game in which they controlled every facet of the game. Prescott and Marshall will have a chance to solidify their team as the leader in the conference with a victory in this game. Coming off a huge victory the Bulldogs will look to knock off the current SEC champion and national championship runner up in Auburn.

In an emotional moment last week, Uzomah score a touchdown and honored the late Auburn TE Phillip Lutzenkirchen by doing his signature dance move. Uzomah is a huge redzone target at 6’5” 264 pounds and has compiled 4 catches for 51 yards and 2 touchdowns. He is also an excellent blocker for a great run game (15th in the nation) at Auburn. Uzomah should get plenty of looks by TE needy NFL teams in this years draft.

Scout’s Take:
“Uzomah has the prototypical size of an NFL TE. He has made the most
of his opportunities this year, by catching a TD pass in each of his last two games. Uzomah is a key part of the best red zone offense in the country.” -Bret LaGasse

Prescott is an offensive machine and as only a Junior he will continue to grow as a quarterback. This season he has recorded 1678 total yards, 20 total touchdowns and only 2 interceptions in a stacked SEC conference. Prescott has the tools to lead his team and lead him to a Heisman opportunity. He is also a great NFL prospect that will continue to develop as the season progresses.

Scout’s Take:
“Prescott shows the arm strength, accuracy, poise, pocket presence,
and leadership to be a great player at the next level. Prescott is focused on right now with this team, and isn’t focused on the individual accomplishments. The sky is the limit for Miss St with Prescott at QB.” -Bret LaGasse

Another huge game in the SEC which I seem to say multiple times a week. Well when you have so many good teams they are all big games. The Ole Miss Rebels will travel to College Station after one of the greatest wins in school history with an upset of Alabama and the Texas A&M will look to salvage a victory after losing to another Mississippi school, Miss St, last week. Ole Miss has not started a season 5-0 since John F Kennedy was president, they will look to advance to 6-0, but Kenny Hill has other ideas as he looks to get back on track at home. This one should be fun.

Fighting through some injuries early this season, Bryant is back on the field for the Rebels. He has added 13 tackles and 2.5 tackles for loss on the season. Bryant is only 5’9” but he plays a lot like London Fletcher for the Rams and Redskins of the NFL. He is a leader and is not afraid to make plays and take on anyone that comes along.

Scout’s Take:
“Bryant is another tenacious defender for Ole Miss. He is only 5’9
but he has no problem hitting anybody bigger than him. I do worry about blockers getting their hands on him first, but Bryant shows the ability to fight off some blocks. Like most RBs his height, he is able to run hidden behind his DL.” -Bret LaGasse

Matthews fits the mold of a big safety in the new NFL scheme that many teams are moving to. Now big, does not mean he is not athletic, Matthews is a freak. He stands 6’4” and weighs 210 pounds, but has no issues covering slot receivers, tight ends and running backs out of the backfield. Matthews has 39 tackles, 2.5 tackles for loss and 3 passes defended. Matthews has some chatter following him through the season and hopes to improve his stock come May for the NFL Draft.

Scout’s Take:
“ Matthews is a safety that has good size and ability. He has been making plays in the box, downfield and also steps up against the run.” -Bret LaGasse